One the the most beautiful and evocative private gardens in the United States has to be the Abby Aldrich Rockefeller gardens in Seal Harbor, Maine. Established after a visit to Asia in 1921, The Rockefellers brought back  a treasure hoard in which to enrich their garden including a collection of imperial yellow roof tiles from the Forbidden City, Peking. These tiles grace the perimeter walls which enclose the garden.  The genius of the scheme was Beatrix Farrand, one of ten in 1899 of the American society of Landscape Designers, and its only woman member. 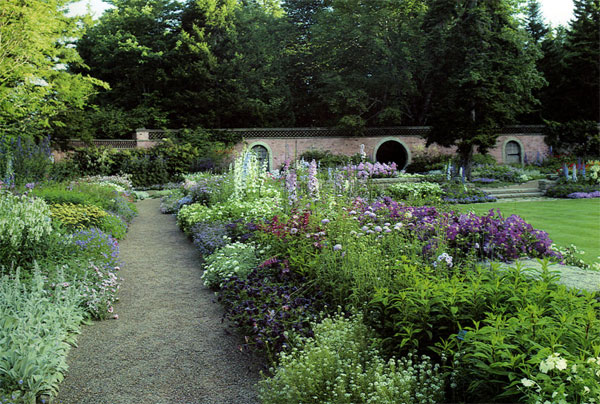 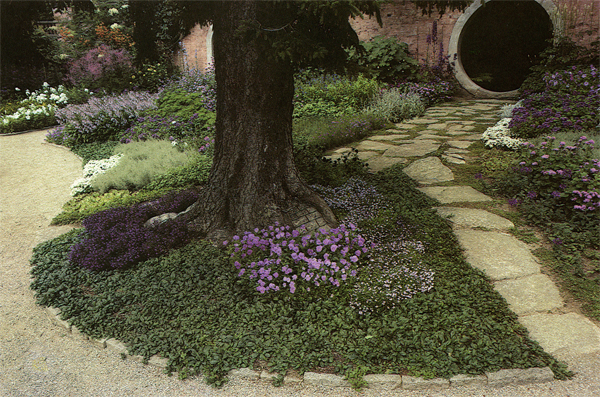 Concieved as a “giardino segreto”, the enclosed garden was placed away from the house with the entrance being a “moon gate” in the Chinese manner.

Originally tender bedding plants were placed out for the summer “Season”, but a visit with Rosemary Verey years later encouraged the planting scheme of perennial plants in lilac, mauve, blue, and white we see today.  One would certainly need the purse of a Rockefeller to reproduce this garden, but there are many design elements here which can be utilized by the intrepid gardener.  The enclosure and classic plan give this garden a “sense of place”,  and the strong bones would enable this garden to look good in every season.  To cut down on costs, water, and maintenence, one could replace some of these plants with hardier, more structural specimens, yet still keeping the soft colorway.  Delphinium, for example, could be replaced with Verbascum or any number of Salvia.  The lawn could be eliminated, replaced with crazy pavement, decomposed granite or pea gravel.

The atmospheric “Moon-Gate” could be incorporated as shown in this contempory garden by Jinny Blom. 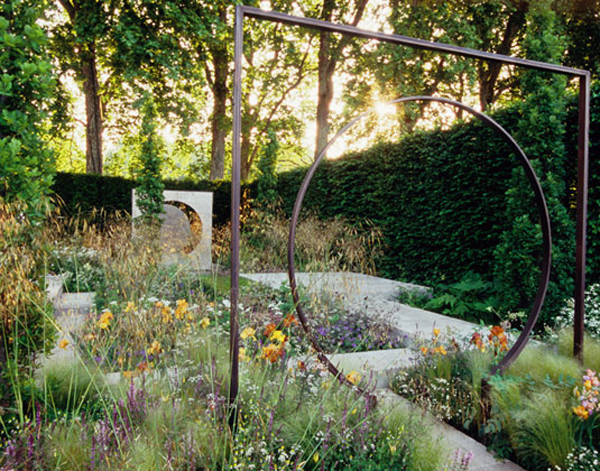 What I most admire in this scheme is that the moongate is not a pastiche, but has been re-invigorated in a fresh and modern way. 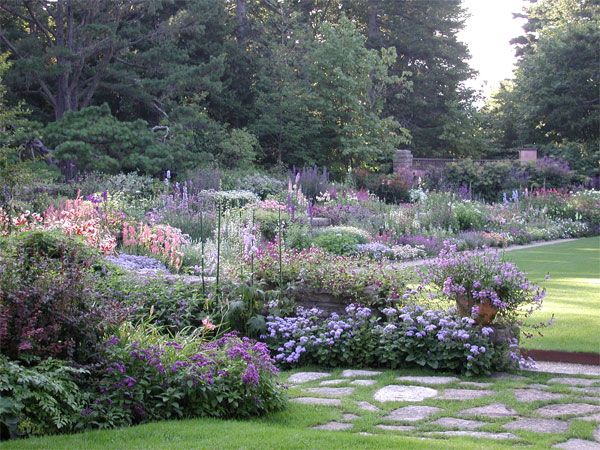 The Abby Aldrich Rockefeller Garden is on Route 3 in Seal Harbor on Mount Desert Island.  A private garden, it can be visited by appointment one day a week during July and August. Telephone (207) 276-3330. Call after June 15th, on a Tuesday or Wednesday.